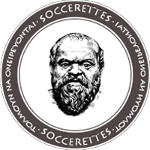 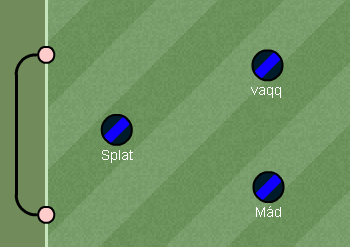 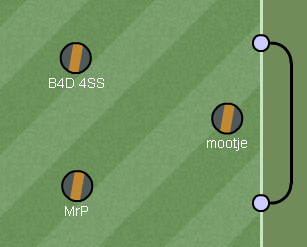 The line-ups I chose may not be the strongest for both teams but they for sure are the most likely. Since abi is quite inactive, the almighty leader Mád will probably put himself on for his debut this season and keep Splat in goal. vaqq should start on Monday, I personally feel that the two goals he racked up are enough to keep him in the starting three.

On the other end of the pixel pitch are Soccerettes who are the longest serving team in the league and the only team to run for all 7 seasons. Along with Deja Entendudes, Socs have the least amount of UK-based players, both with 1. This 1 UK player is B4D 4SS the winner of Season 4 with Sheepshaggers. He might be a fiery character at times but for sure he's one of the better players in this league. It's hard to predict Soc's line-up as they postponed their game against Deja however my brain is going with the 3 most active players. The captain, MrP only plays himself in PremierHax so that should be obvious and mootje who is in the top 5 most skillful players in the league. 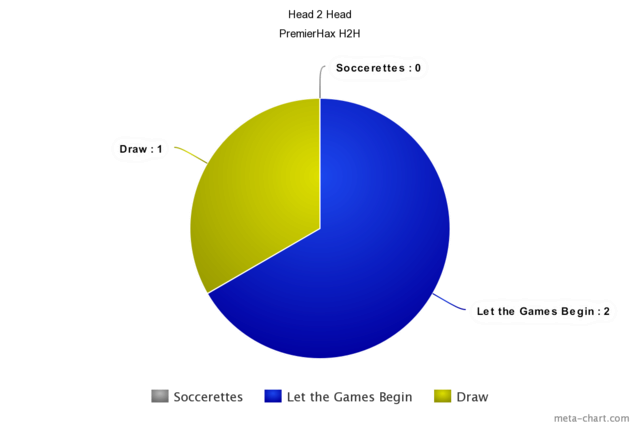 The pie chart shows that Soccerettes have never beaten Let the Games Begin. Also, the scores have been quite low for 2 matches, the latest one in Season 6 Matchday 16 finished in a 7-1 thrashing of Socs, but we all know how last games of the season go :spurs:. The 2 games that mattered were 1-0 and 1-1. Both captains play this game for years so they should both put on a tactical mode and make this game low scoring again.

Average goals scored and conceded through out the season


Goals scored
Goals conceded
It's funny to see both teams concede the same amount of goals a game through out their history. Soccerettes have a closer ratio to goals scored and conceded, but they still concede more than score. LGB score an astonishing 3.25 goals a game and concede exactly 1 less.

It's not hard to say what player to focus on in these two teams. Mád will for sure entertain us with his brain usage as well as the tricks, no surprise he's the 2nd all time top player. mootje is the best skiller in the league, his goalkeeping is good too, we will see how he dictates the attacks too.

Both teams are classified as upper-tier this season so I am not expecting a high scoring game especially when both teams have great defence. We can expect lots of tricks and skills from all players on the field (except for MrP of course).

It will be a high tempo game but I reckon that 1 goal will decide everything, it will be very hard to score no matter who you are.

Re: Let the Games Begin vs. Soccerettes ~ Tactical Masterclass

Message reputation : 43% (7 votes)
'mootje is the best skiller in the league' lmao are u high
also splat in goal? LOL rip lgb if that happens, highly doubt it. inaccurate preview tbh, but gj anyway